What is The Greening Campaign?

The Greening Campaign is about local people taking local action about climate change. Instead of people feeling helpless in front of such a frightening topic, we believe that if individuals in a community take small actions, all those add up to make a big difference. We also believe that if lots of communities join together to take action, then the difference we make may start to reduce the effects of climate change.
The Greening Campaign was the brainchild of Terena Plowright, from Petersfield, who helped set up a national network of over 200 communities running their own local campaigns.

Steyning 10:10 decided to launch our own local Greening Campaign. We held a Public Meeting in April 2010 to choose a set of challenges for households to commit to in our community. Around 50 people attended representing 30 different organisations and community groups.

The launch event was aimed at engaging the whole community in the campaign, explaining the challenges, and illustrating how people can make a difference through taking simple actions. There were stalls with energy saving tips, green demos, a solar energy display (courtesy of Southern Solar), plus songs, and competitions – all illustrating the 9 Green Challenges that will form the heart of the campaign. Outside there was a fantastic Art Bus – full of children’s pictures from local primary schools, plus a free Bike Clinic (courtesy of Pro Cycles). And there were loads of delicious homemade cakes for sale, baked by volunteers.
The Launch was sponsored by a grant from the Chanctonbury County Local Committee, and Southern Solar. Around 40 different organisations took part or helped out – running stalls, providing raffle prizes, or offering support of other forms. It was a fantastic team effort. So a BIG thanks for everyone who helped! 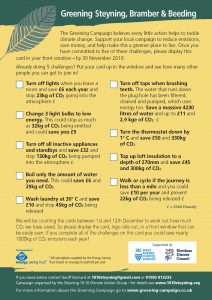 So what does this mean in terms of the total savings made? Using data from the Energy Savings Trust, the Greening Campaign headquarters has calculated that between us this works out as an annual saving of: 171 tonnes of carbon dioxide, 143,000 litres of water, and over £31,000 in cash terms. These figures are based on averages of the activities on the cards and assumptions of typical annual use for a three bedroom semi-detached property with gas central heating and an average occupancy of 2.9 people, and average use, cost and carbon content of gas and electricity. So it’s an approximation – but impressive all the same.

Local businesses have been getting involved too. We created a special challenge card for businesses.  Click here for our Green Business page.

The  Campaign has now moved on to Phase 2.  A public meeting was held in January 2011 at Steyning Cricket Club to canvas views on where we should focus.  Around 50 people came along.  After a lively evening of discussion, a vote was taken on which of the sixteen main ideas had the strongest support.  These were whittled down to four main priority themes for 2011: 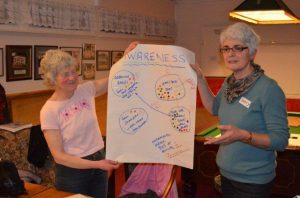 After a successful first year, we geared up for a second year of green action.  After another well-attended Planning Meeting in January we came up with a plan that focused on:

We created a basket of fresh ideas to get people thinking about how to make our community a happier, greener and more sustainable place to live.  After a lively planning meeting in January 30th, we came up with five main themes for the year:

This was the big focus.  Having negotiated an excellent community deal with the project developers, Inazin, we were dismayed to find the application for this 15MW solar farm just north of Steyning turned down by Horsham District Council Planning Committee in April.
To find out what local people felt about this we ran a survey.  We got an impressive response: 230 people gave their views.  The full results are available here and were convincing:  overall, 91% were in favour of the scheme, including 67% who were strongly in favour.  This compared to less than 5% who were against, or strongly against it, a margin of nineteen to one in favour.
Armed with these results, Steyning 10:10 put in a submission to express our strong support for the appeal, which was adjudicated by the independent Planning Inpectorate. Our thinking was laid out in this presentation,  which included details of the scheme, and photos from all angles.  Sadly, after nearly a year, the scheme was finally turned down at appeal – though two other nearby solar farms, at Ford Farm and Priors Byne Farm, were approved.

424 Visits to Steyning Eco Open Houses in one day!

Steyning’s first ever Eco Open House day on April 27th began in the drizzle.  But before long we had a steady stream of visitors that lasted all day.  All together we had 424 visits to the four Steyning houses that opened up to the public. A big thanks to our partners the Low Carbon Trust and Brighton Permaculture Trust, who masterminded things, and to our new friends from Transition Town Worthing who ran a similar event two weeks earlier.  If you missed it, you can learn all about it and download case studies on all the houses from the Eco Open House website.

We helped give a green tinge to our fantastic bi-annual Festival by showing the film “Trashed” and organising an Eco Walk that took in two eco-homes, the allotments, and Adur Brewery. 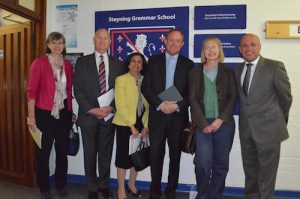 Alongside our regular Green Drinks and Give Your Stuff Away Day sessions, the two big events of 2015 were the General Election and the Paris Climate Summit.  We rose to the occasion for both.
We held a very successful “Question Time” style hustings debate focusing on climate and environment issues in the run up the the General Election. A packed hall at Steyning Grammar School heard our local Parliamentary Candidates being grilled by 6th formers and other local residents.  The event was expertly chaired by Robin Hart, from nearby Wilton Park Conference Centre.  Photos are available on Facebook, and a video recording on YouTube.

We took to the streets in London ahead of the Paris Climate Summit, with a strong contingent making it to the capital on a blustery November day to add our voice to calls for a strong and meaningful climate deal at COP21.
We also held a special Green Drink briefing at the Cricket Club to provide a background on the Paris talks.
It obviously worked – the Paris Summit was heralded as a big breakthrough.  Now it’s our job to make sure we keep up the momentum, but locally and nationally.
How you can get involved?
If you would like to get involved, contact us at 1010steyning@gmail.com 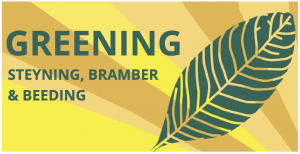